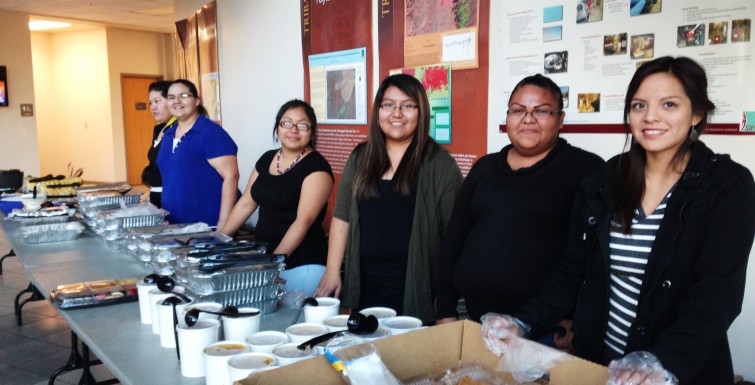 Thanksgiving is a time of sharing and community bonding. The Southwestern Indian Polytechnic Institute (SIPI) Youth Development Incorporated (YDI) families engaged with one another during our Native Harvest Feast on November 24, 2014.  SIPI YDI families and Wakanyeja “Sacred Little Ones”/Ke’ staff worked together to provide a Native inspired meal to share in honor of the “giving thanks” season. The event commenced with a prayer offered by SIPI YDI parent Donavon Barney.  Before he prayed he set the mood, and expressed the importance of being thankful for the SIPI YDI staff and teachers, Wakanyeja “Sacred Little Ones”/Ke’ initiatives staff, SIPI YDI parents, and the greater community.  Following the prayer, a heartfelt welcome was shared by the project director Dr. Danielle Lansing and her staff.  Adults and children then shared a delicious meal as one family and community.  Many parents contributed a homemade Native dish to share such as; potato salad, corn and squash, blue corn mush, a variety of desserts, and the Lakota blueberry dessert, Wojapi!    Happy emotions were shared amongst all the families and many families appreciated the hard work and dedication of all staff.

One of the many activities that took place during the event was the papier-mâché turkey project! This activity involved every child and all family members to take part in the process and completion of the project.  The children were glowing with pride and were very proud of their craft accomplishments, and some even suggested that they wanted to make another turkey! The parents were also filled with warm feelings and pride when they noticed that this was no ordinary turkey, the children’s handprints were the turkey’s wings!  The SIPI early childhood student interns facilitated this activity, in which the students spent many weeks preparing materials for the project. All in all they gained a valuable experience in family engagement lessons!

During the event we were privileged and honored to feature a guest appearance by Miss SIPI 2014, Cheyenne Mitchell.  She was excited to share in the thanksgiving spirit and festivities with all attendees. Miss SIPI awed the audience with her melodic singing and traditional songs to get families in the spirit of reflection and gratitude of thankfulness.  Cheyenne sang a traditional Navajo song that reminded us to honor our elders and the guidance and wisdom they bestow upon us.  She also encouraged and shared her appreciation to the families that were in attendance to always stay involved in their children’s academic endeavors.

As the event concluded, parents were glad to see such happiness in their children. The children were happy to make their own turkey and showed them off to their family and friends. The children traced their own hands and parents helped them cut it out.  All the participants left feeling the joy of community.  Families were reminded of the meaning of the Thanksgiving season, and this event inspired a new start to an existing tradition.  The children, families and staff look forward to the next Thanksgiving when we get to do this all over again! 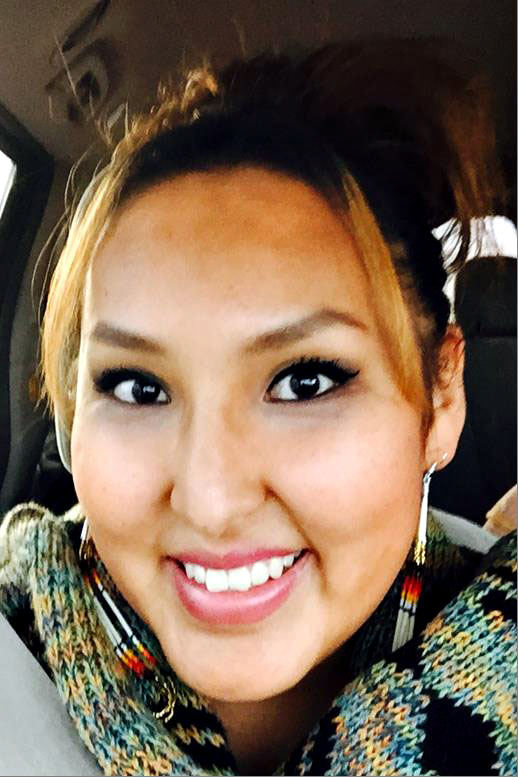 ABOUT THE AUTHOR: Stacie (Jicarilla Apache/Navajo) is from Cuba New Mexico, but currently residing in Albuquerque, NM. She is the proud mother of two children, Aisha, and Daeghen. Stacie will be receiving her bachelor of science degree from the University of New Mexico (UNM) in family studies. She is also attending Southwestern Indian Polytechnic Institute (SIPI) and UNM concurrently for the Spring 2015 trimester to receive credits towards her bachelor of science degree from UNM. Stacie is the vice president of the Southwestern Indian Polytechnic (SIPI) Youth Development Incorporated (YDI) Head Start Parent Task Force,an active team member with the Wakanyeja “Sacred Little Ones” early childhood initiative and also serves as a parent intern with the SIPI Ke’ Family Engagement Initiative. She is the co-founder of Plus Light Productions a Native American owned production company in Albuquerque, N.M. and of the American Indian Albuquerque Network, a social media outlet that serves as a communication source for the Albuquerque surrounding area. She is a singer an actress on her down time and was featured in Native American films. She is driving life force and is committed to the empowerment of her Native American people.