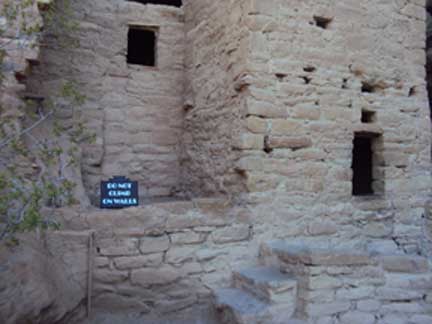 After reading through a few notebooks, I talked to my mentor and asking questions about things mentioned in the minutes that seemed crazy.  For instance, at some of the cliff dwellings people were actually encouraged to walk on the sandstone walls up into the 1990’s. This information was shocking to me because the standards today are much higher. People aren’t even allowed to touch walls anymore let alone run around on top of them!

From this discussion, I was given a video to watch.  The Anasazi Heritage Center and the Crow Canyon Archeological Center, which are located not far from Mesa Verde, had produced a video on respecting these sites that was highly regarded by critics and won some awards. My mentor was interested to see what I thought of the video. My opinion of the short was rather judgmental, but first I need to explain.

I like to think of myself as an unpaid movie critic, so I must preface my opinion with this: I rarely see a performance from a Native person that I am satisfied with. In this video, however, the people who participated were not paid actors but actual members of tribes that are culturally affiliated or traditionally associated with the surrounding historical sites. One person who held my interest in the film was a young girl who shared her perspective and pulled me into the spirit of the movie. She wasn’t trying to sound deep or like a medicine woman out of a bad western, she just spoke from her heart. The way she spoke and the wording of her response are what I would’ve wanted to hear if I had asked her personally.

I have seen reactions of other people who watch this film and they are truly moved. It was as if someone opened their eyes because they are hearing from the descendants of the people that built these villages, and those descendants still care. I think sometimes Native people are invisible to most of America. I don’t think that non-native people are trying to be disrespectful; they just don’t know or don’t think there are still established spiritual ties with modern Indians. When they see this movie and are confronted with previously unseen people with a face and a voice telling others to respect these sites, their ancestors, and their culture, that has impact.

I don’t require a reminder that the ancestral puebloans have descendants still thriving. I can put a face with a name because the Native network is small. People I know and respect are members of tribes affiliated with this place. As a result, I feel it’s an honor to be working here, doing the amazing work I do.