May 5 Honors Indigenous Murdered and Missing Women and Girls

The American Indian College Fund joins the National Network to End Domestic Violence on May 5 to recognize the National Day of Awareness for Missing and Murdered Indigenous Women. 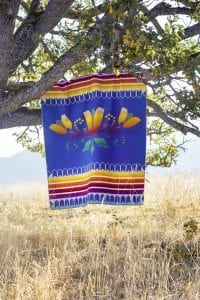 You can order Deshawna Anderson’s “Courage to Bloom” design at  www.pendleton-usa.com.

An American Indian College Fund scholar is doing her part to create awareness of murdered and missing Indigenous people, noting that boys and men are often victims, too. Deshawna Anderson, a tribal college student at Little Big Horn College in Montana, is the 2020 winner of the Pendleton student blanket design contest. Her design, “The Courage to Bloom,” incorporates elements to honor murdered and missing Indigenous people. Anderson, an enrolled member of the Crow Nation who is studying business administration, said the traditional arrow shapes on the blanket symbolize finding a good path in life while acknowledging that every path holds pitfalls and opportunities. To honor the loss of missing and murdered Indigenous people, she included an hourglass shape at the base of the largest blossom to symbolize life’s spiritual journey through the most difficult circumstances.

“It’s sad that it has to be something like this, but I hope that whoever is able to put on the design or wear it is able to get comfort from it…I hope it makes them feel good because I put good thoughts into it,” Anderson said.

Dr. David Yarlott, President of Little Big Horn College, said, “What a tremendous boost in morale and confidence for a tribal college student to be recognized and rewarded for talent in Native thought and design! The thought that went into the design that symbolizes a contemporary issue for our Native community tugs at our hearts and raises awareness.”

By promoting the talents of Indigenous scholars, the College Fund creates greater visibility of important issues impacting them and their communities, while supporting Native higher education.

Deshawna Anderson’s “Courage to Bloom” design was chosen from 48 entries in the inaugural 2020 Tribal College Blanket Design Contest. It is available for purchase at www.pendleton-usa.com.