May 10, 2019 | Blog, For the Wisdom of the Children, Inside the College Fund, Our Programs 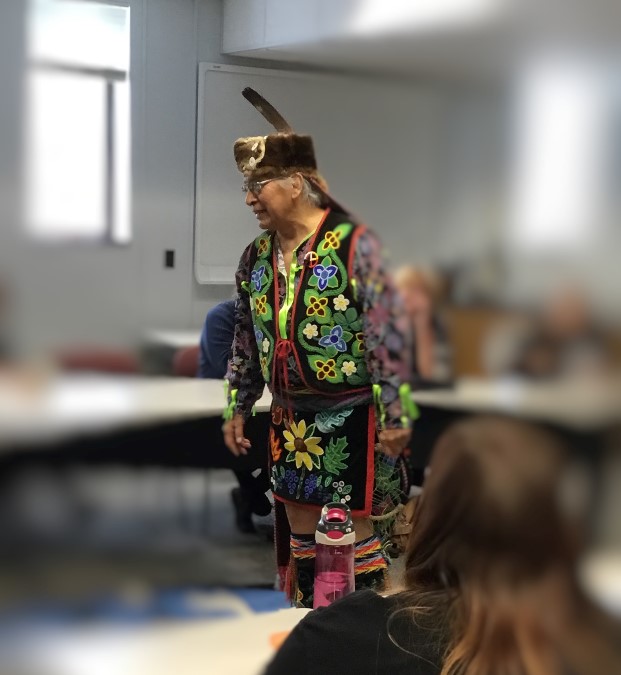 Dennis White addresses a crowded room of early childhood educators with stories about how math and art are woven into everyday life. Christine Awonohopay looks on intently as Mr. White finishes his story.

The day started like a day at most professional development workshops. We made copies of handouts, placed pencils within reach for participants, and tried to predict the participant turnout. The sign-in sheets and surveys were laid on the registration table, dispersed among the many Native American handmade bags, rattles, and blankets that were on display.

As participants arrived, we greeted them with a smile and an agenda. I don’t believe any of us were truly prepared for the mental transformation that was about to occur.

Our speaker, Dennis White, was introduced to the crowd by Keweenaw Bay Indian Community (KBIC) tribal member Joseph Dowd. Mr. Dowd began his introduction by introducing himself to people in the crowded room in Ojibwa and English. He set out an abalone shell with a small sage bundle to smudge the room and the participants. Burning sage is a traditional spiritual ritual among many Native American tribes. The practice is believed to have several benefits such as dispelling negative energy, helping soothe stress, and increasing one’s focus.

As Mr. Dowd moved about the room, carefully fanning the smoke from the burning sage, he explained that as we smudge, we will all be on the same page.

“Just do what the person does before you… that’s how the kids learn, just mimic what the others do,” he encouraged participants as he walked around with the burning sage, stopping in front of each person while fanning smoke towards them. As he stopped by each person, they bowed their head and waved the smoke over their body.

Dressed in his formal pow-wow attire, Dennis White addressed the crowd of about 20 teachers and community educators. He smiled as he greeted the group in both Ojibwa and then English. Mr. White started by telling a story about his love for math and educating young people. Then he shared stories about how math inspired his beadwork. Every element of his clothing, from his vest to his belt, has a story.

“If we see a form and pattern to it, then we can understand it,” Mr. White shared, explaining why math is so important to learning anything.

The patterns that Mr. White sees around him have been intricately adapted to his bead work in some shape or form. “There is such elegance in mathematics that we sometimes forget that.” 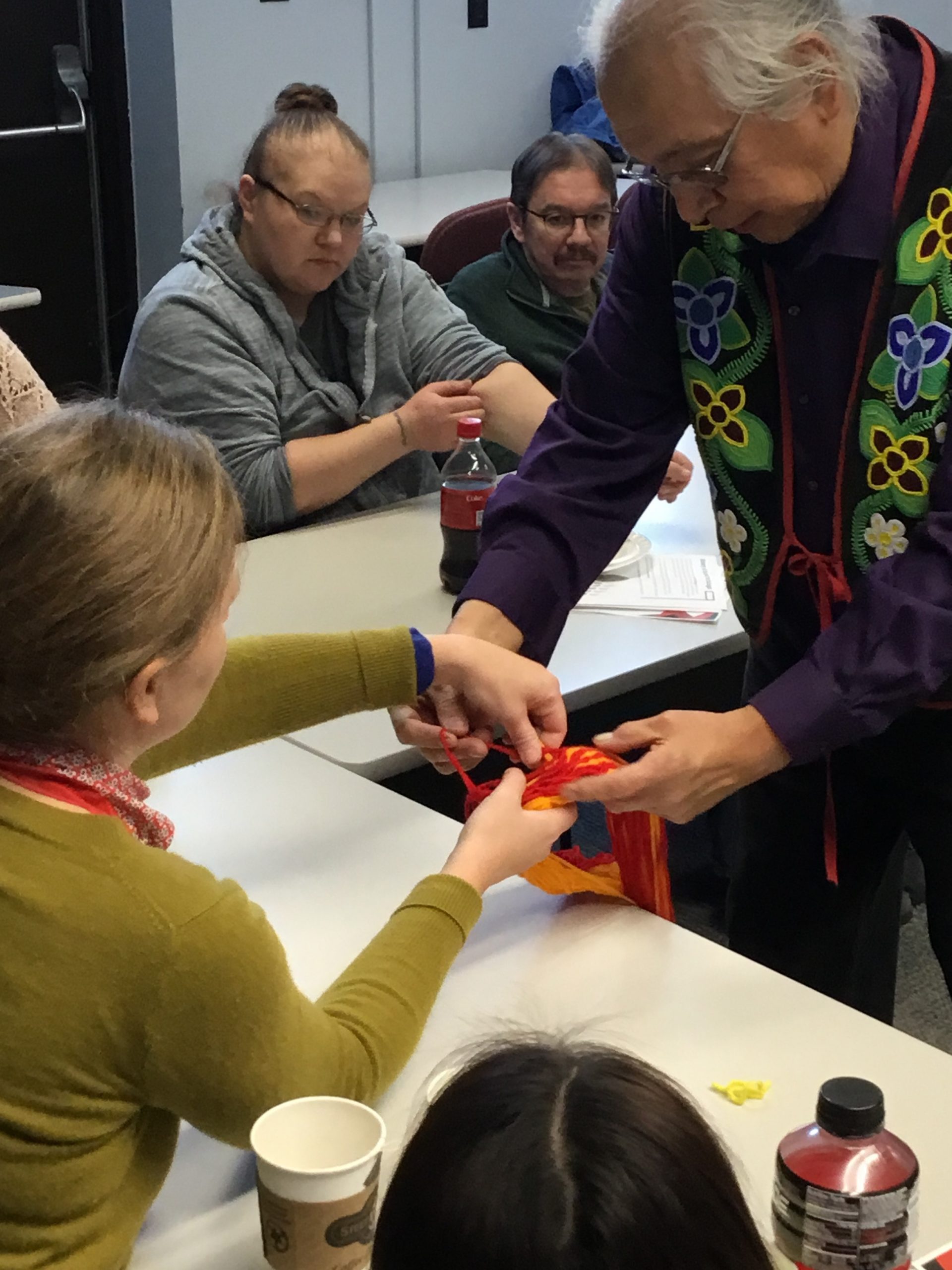 Mr. White spoke about the patterns inspired in his traditional beaded vest, and shared small nuggets of mathematical themes, like tessellations and the Fibonacci sequence.

“Fibonacci is not a lie, it’s not a fib…Fibonacci occurs all over the place…I have seen the Fibonacci sequence in the blueberries,” he said, pointing to the clusters of blueberries beaded in his vest.

The Fibonacci sequence is a sequence such that each number is the sum of the two preceding ones, starting from 0 and 1. Mr. White continued to talk about how nature displays symmetry and can be the basis for artistic and mathematical inspiration.

“Symmetry is in our designs, beading, and sometimes in our lives… If we don’t make a design from a snowflake, we’re crazy!”

Life’s lessons flowed from Mr. White’s heart as he spoke. It was easy to see that he feels passionately about math. Mesmerized by his stories, his gentle demeanor, and his profound language, the people in the room attentively listened and asked questions about every detail.

The group broke for lunch, then reassembled to the sound of Mr. White playing the flute.

They were not warned or prepped to know what the sound of the flute would mean, but it was a call to attention in a very delicate way. This was the rhythm of the day, honorable and respectful.

Workshop participants were invited to become teams or pairs to create a round braid. It was apparent very quickly that this activity had less to do with braiding yarn in a pattern and more about interacting with each other. Teams and pairs of community educators fumbled and encouraged each other in completing a few twists of this pattern, referred to as the rounded braid.

The educators left this workshop feeling inspired and encouraged:

“This was such an excellent cultural resource…”

“The feeling in the room…I just can’t describe it.”

“I really liked the theme of humility, humor, sincerity, and passion …”

“The subject matter was really computational and connected to our everyday lives!”

“It was fascinating to me to hear how everyone was going to implement culture into their programs.”

“I will be implementing much of this in my classroom! I am brimming with ideas!”

“I would love to attend a three-day session …have an in-service about food, weaving, drumming, language, storytelling…”

This type of workshop is instrumental to changing the way we present academic material to our youth in the classroom in the Upper Peninsula. It connected the goal of educational institutions to instill values in our youth with the more effective and traditional way that can be life changing. What is learned in the classroom should be instilled in the hearts of students, not just the brain. If students are inspired and challenged in their hearts, the effect is both life-changing and long lasting.

Our project is supported by a grant awarded to the Keweenaw Bay Ojibwa Community College by the American Indian College Fund’s “For the Wisdom of the Children: Strengthening the Teacher of Color Pipeline.” For the Wisdom of the Children ECE STEM Initiative is generously funded by the W.K. Kellogg Foundation and the community-based programming is in part supported by supplemental funding provided by the Toyota Motor Company. The teacher education program has an initiative to reach at least 100 teachers in the Upper Peninsula over a two-year time period. The mission overall is to train educators to use Native American traditional techniques to instill history, culture, and educational value into our future youth, starting at the preschool level. We have several workshops planned in the tri-county area with the hopes to reach and train families, classroom educators, and teacher trainers. 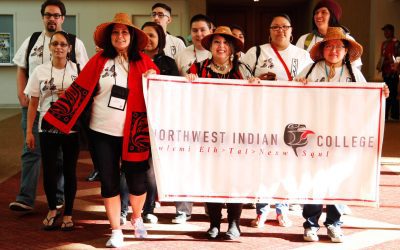 June 14 is Flag Day, when the United States commemorates the adoption of the U.S. flag, reflective of the status of...

END_OF_DOCUMENT_TOKEN_TO_BE_REPLACED 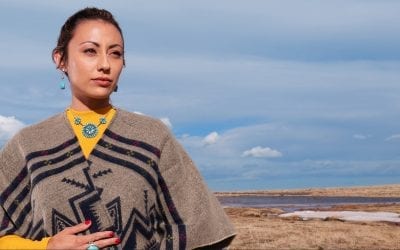